Stewart Copeland has spent more than three decades at the forefront of contemporary music as rock star and acclaimed film composer, as well as in the disparate worlds of opera, ballet, and world and chamber music.

Copeland moved beyond the rock arena in the mid-1980s, after The Police successful experience, when he returned to his classical roots with creative pursuits in concert and film music. His concert works include BEN-HUR, A Tale of the Christ, which features Copeland as soloist in a live orchestral score for the 1925 silent film; Tyrant’s Crush: Concerto for Trapset and Orchestra commissioned by the Pittsburgh Symphony Orchestra, Poltroons in Paradise commissioned by the Royal Liverpool Philharmonic Orchestra; and Gamelan D’Drum, commissioned by the Dallas Symphony Orchestra for the world percussion group D’Drum.

OFF THE SCORE
“Off the Score” is a sizzling performance collaboration between drum legend Stewart Copeland (The Police), visionary pianist Jon Kimura Parker, Met Opera violinist Yoon Kwon, rising star bassist Marlon Martinez and champion of the Electronic Valve Instrument (EVI) Judd Miller. New works by Copeland and Parker collide with amped up renditions of great pieces from the classical canon including Ravel’s Piano Concerto in G and Piazzolla’s Oblivion. Add in jazz pianist Mike Garson’s Paganini Variations and a wild arrangement of an Aphex Twin tune and the annihilation of genre is complete! “It marries classical music and rock, the composed and the spontaneous” (NATIONAL POST) 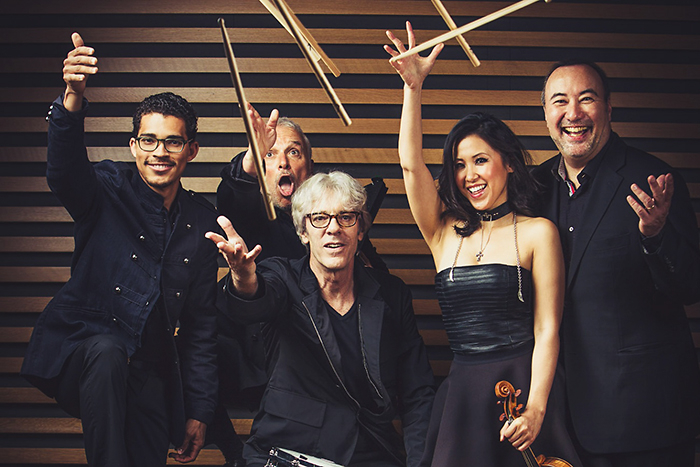 Reviews:
“It marries classical music and rock, the composed and the spontaneous”
(National Post)
TYRANT’S CRUSH
Concerto for Trapset and Orchestra - commissioned by the Pittsburgh Symphony Orchestra. The first concerto written with his own performance in mind, Stewart Copeland has created a work that features his own brilliant drumming plus complimentary parts for members of the percussion section and an array of exotic percussion. The work celebrates the un-tapped virtuosity of the symphonic percussion section and demonstrates that the distance between rock drummer and timpani virtuoso is not as fas as one may think. “A daring, dynamic and challenging piece that is in keeping with Copeland’s history as a composer of beautifully idiosyncratic pieces” (BUFFALO NEWS)

Composed by Stewart Copeland
Commissioned by the Pittsburgh Symphony Orchestra

Reviews:
“It builds to such a pitch of skittering hyperactivity that by the end Copeland seems to be intent on developing his own genre – maximalism, perhaps.”
(The Guardian)
BEN-HUR: A TALE OF THE CHRIST
Stewart Copeland’s original score to BEN-HUR, A Tale of the Christ was commissioned by Virginia Arts Festival, and features him as soloist in a live orchestral score for the 1925 silent film. This is a project that for the first time combines Copeland’s many talents in composition, orchestration, film scoring, film editing, and his remarkable virtuosity behind the drums. “From the in-your-face rock percussion announcing the familiar MGM lion to the final cymbal echoes ringing over the resurrection finale, Copeland commanded the audience’s attention and praise.” (LOS ANGELES TIMES) 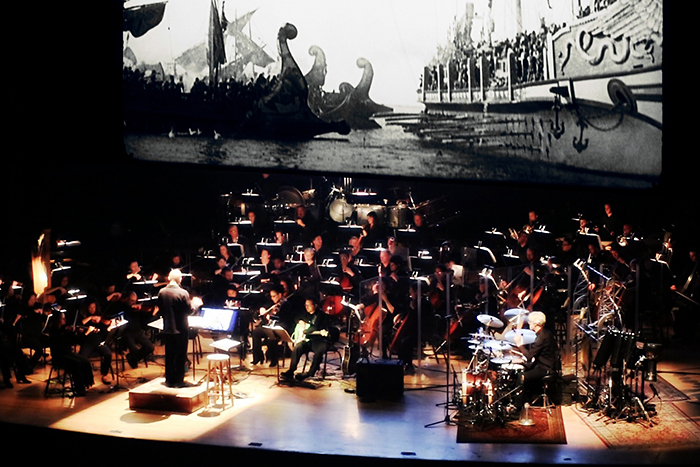 Reviews:
“The captivating mix of expressive faces, mood changing screen colors and dynamics of music made seeing a movie feel fresh again, even one almost 100 years old. One of the most surprising successes of the season.”
LIGHTS UP THE ORCHESTRA
A high impact orchestral celebration of the highlights of Stewart Copeland’s legendary career in music. An evening packed with epic music from The Police songs to his best known Film scores from Francis Ford Coppola’s Rumblefish to Oliver Stone’s Wall Street and even some of Spyro the Dragon! Co- arranged and Conducted by Musical Director Troy Miller. 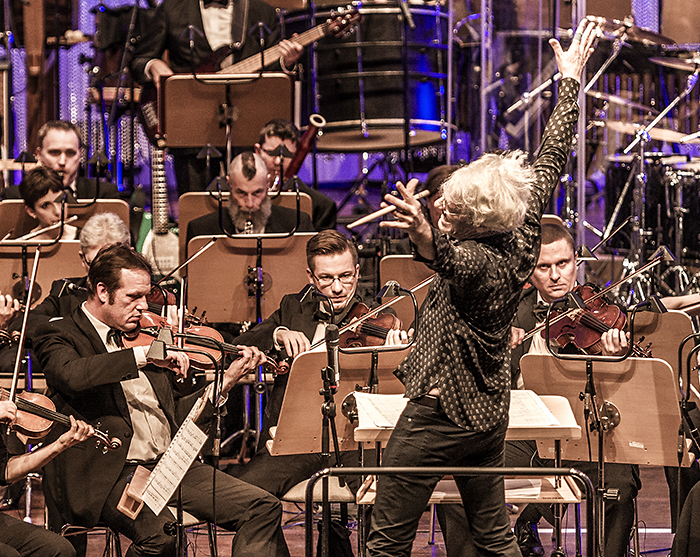 Premiere:
20 March 2020, Elbphilarmonie, Hamburg (Germany)
POLICE DERANGED FOR ORCHESTRA
A high energy orchestral evening celebrating the work of legendary rock star and composer Stewart Copeland. Following his high impact ‘Light Up The Orchestra’ project celebrating his composition in Film, TV and Video Games, ‘ Police Deranged For Orchestra’ focuses on the epic rise of Stewart’s career in music that has spanned over four decades.